The Basque Country is not the first place people think of when planning a trip to Spain, but the question is: why not? This autonomous region in the north of Spain contains a dramatic scenery of rugged coastlines, interior mountains and rolling vineyards, with strong cultural traditions existing alongside avant-garde art and architecture, all of which is well-worth a visit.
But let’s get right to heart of the matter: the food. We’ve sampled tapas, or pintxos as they are called here, in many parts of Spain, but nothing compares to what you find in Basque Country. The attention to eating well is part of the culture, from the simplest of snack bars to the more formal restaurants. It is said that the revolution in Spanish cuisine witnessed over the past few decades originated here and then spread to the rest of the country and beyond.
So if you don’t like great food and wine, then the essence of Basque Country will escape you. If you do, then dive in with us!

Day 1 – Bilbao to Vitoria-Gasteiz
After landing in Bilbao, we immediately noticed that we were in what is called the “Green Belt” of Spain. As the car whisked us to Vitoria-Gasteiz, the regional capital just one hour away, we were welcomed by the lushness of the green, forested hills. And while the rest of Spain was baking, we enjoyed the mild temperatures and a refreshing breeze.
Our first lunch in Vitoria-Gasteiz was at the intimate Taberna Tximiso where we were treated to an exquisite assembly of pintxos, each one more toothsome than the last, washed down with a crisp, local white wine. The owner explained each one with passion and even treated us to an off-menu item. The bill? A mere 23 euros for two. The evening meal consisted of a sampling of the many pintxo bars lining the streets of the medieval quarter, where the strolling and chatting and eating and drinking crowds contributed to a festive atmosphere.

Day 2 – Vitoria-Gasteiz
We spent the second day casually exploring the medieval quarter alternatively known as the “Casco Viejo” or the “Almendra”, almond in Spanish and a reference to the shape of the streets that radiate from the center. The tour of the Santa Maria Cathedral is a must-do while here. The church has been under restoration for many years since nearly collapsing and the tour takes you on a fascinating behind-the-scenes look at the work being done.
Dinner was at El Portalon: the food here is more traditional and relatively pricey, but the setting of this 15th century inn is mesmerizing and well worth a visit. 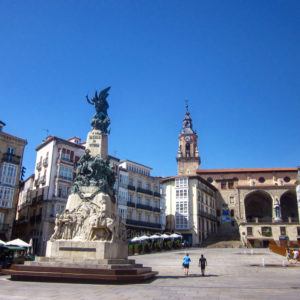 Day 3 – Vitoria-Gasteiz To Rioja Alava
After a quick breakfast, we hopped into the car and hit the road to our next stop in the Rioja Alava wine region. As we climbed the mountain range that separates the region from the rest of Basque country the forest grew thicker and the clouds heavier. But just after going through the Herrera Pass things changed dramatically. The clouds and fog dispersed and before us was a landscape more typical of Spain: rolling hills the color of honey punctuated by green bursts of scrub trees. It took about an hour to arrive at our destination, the small village of Villabuena de Alava. There is not much to see or do here; the purpose of our visit was a stay at the Hotel Viura. The hotel is tucked into the hillside at the bottom of the village and is a strikingly modern juxtaposition to the surroundings. It is one of many examples in the area of contemporary architecture, most notably seen in the hotels and wineries, some designed by internationally renowned “starchitects” (more on that later).
For lunch, we headed to the mountain top village of San Vicente de la Sonsierra (a lengthy name in dramatic Spanish flair) just over the border in Rioja proper and only 10 minutes away. Casa Toni is on an unassuming street at the end of the village, not a place where you would expect to find some of the most inventive cooking of the region. Soon after ordering we were presented with an amuse bouche of goat cheese and truffle between thin pastry crust, accompanied by beet sorbet presented in a lipstick tube. Amusing and delicious. And delicious and original were the appetizer – sardines with mackerel roe, garlic ice cream and olive oil – and the main dish, shredded pigeon with mushrooms, thyme and hazelnut vinegar.

Day 4 – Rioja Alava
This was a day focused on wine. The first stop was the world-renowned Marques de Riscal winery. The wines produced here are excellent, but the centerpiece is the Frank Gehry-designed hotel that sits atop the complex and its immaculately kept grounds. The wine tour was interesting and informative and the tasting at the end included some of the estate’s best wines. Next up was lunch in the quaint hilltop village of Laguardia where the streets are lined with wine-focused shops and cozy tabernas. After lunch it was on to Ysios, another distinguished winery, this one designed by Santiago Calatrava. Closer to our base we visited the Baigorri winery, a strikingly modern glass box overlooking the vineyards, and the more down-to-earth Luis Canas. The level of quality and price of the wines in the region combine for a great value. So if you find one you like, most wineries will ship within Europe and to the U.S., but consuming locally is also a good thing. And we made the most of it! 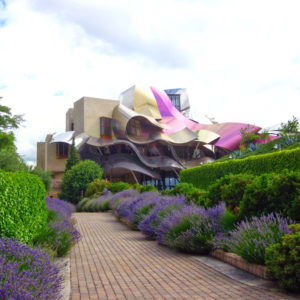 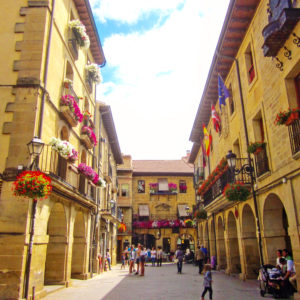 Days 5 & 6 – San Sebastian
Reluctantly leaving the contemporary luxury of the Hotel Viura, we headed north to seaside city of San Sebastian. We arrived in a light rain, but that did not dampen our enthusiasm for the gastronomic pleasures we were anticipating. And we were not disappointed.
Lunch at Kokotxa could not have been a better start. The tasting menu of six courses was a series of unexpectedly delectable combinations of flavors and textures, such as soft-shelled crab with kimchi and tapioca or squid ravioli in sea broth. Be sure to book well in advance.
In the evening it was time for our crawl through the pintxo bars of the old town or “Parte Vieja”. This is not your average dining experience. In fact, it’s a challenge, but be assured it is well worth it. Our advice is the three Ps: patience, persistence and a bit of pushiness. First you will have to squeeze your way through the eager masses just to get to the bar. Once there, the best bet is to ask your fellow diners how to order or just get the attention of the bartenders, who if you’re lucky, will speak English. Keep an eye out for the plates you see circulating and if you see something you like, ask what it is. The pintxo bars may seem chaotic, but after observing for a while you see that they function like a well-oiled machine. Your reward for this work is not only some of the most delicious food you will ever eat, but also an inclusive cultural experience. There are so many fantastic places it’s difficult to pick a favorite, but La Cuchara de San Telmo and Bar Zeruko were standouts.
How to work off all of those calories? San Sebastian is a picturesque and walkable city. Take a stroll along the promenade of La Concha Beach or hike up Mont Urgull for stunning panoramas of the city and the surrounding countryside. You can even rent a surf board and catch some waves at Zurriola Beach. 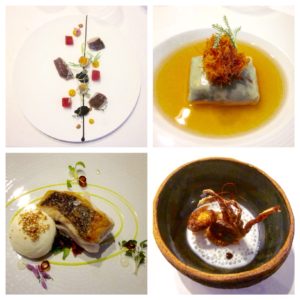 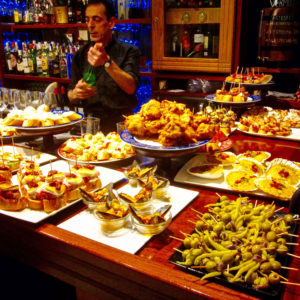 Days 7 & 8 – Bilbao
Having had our fill of pintxos and other gastronomic delights (well, honestly, we could have stayed for more), it was time to move on to our last stop, Bilbao. A quick one hour drive and we were in the city famed for the Frank Gehry-designed Guggenheim Bilbao museum, opened in 1997 and the driver of a subsequent economic revival. While the museum is a must-see during your visit, the city revealed many other pleasures to us over the next couple of days, such as the Bilbao Fine Arts Museum, the Casco Viejo with its narrow streets, the revitalized riverfront pathways and the lush Doña Casilda de Iturrizar Park. Another gem we discovered was the Azkuna Centroa, a cultural center created from a former wine warehouse, with interiors designed by Phillipe Starck.
But let’s get back to that museum – after almost twenty years, the Guggenheim is still in an immaculate state. The undulating titanium and stone walls of the exterior are stunning in their own right. The interiors, however, is where the true genius of the design displays itself. The main atrium evokes a cathedral with its soaring spaces and shafts of light coming from different directions. We wandered around the well-proportioned galleries spread over three floors (a comprehensive Louise Bourgeois exhibit is on at the moment) and went to the ground floor to discover our favorite installation: Richard Serra’s The Matter of Time, a set of eight, huge metal sculptures that will mesmerize you with their iron skin, their changing colors, their size and their labyrinthine display.
Bilbao has many respectable pintxo bars, but they are less frenetic than those of San Sebastian. The food scene has developed in lock-step with the economic revival and there are several world-renowned restaurants in the city and its outskirts. For our favorites we go high and low: Extanobe, overlooking the city from its perch above the Palacio Euskalduna, is an exquisite dining experience and the historic Café Iruna, with its Moroccan-inspired interiors, is a must-stop for the lunch menu.
This was our last stop of what was a fantastic, and tasty, voyage. Not only will we remember the food and wine of the Basque country, but also the vibrant culture and welcoming people. All the more reasons to return soon! 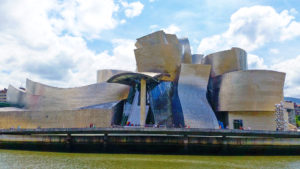